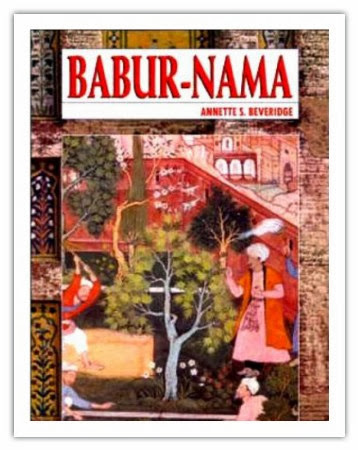 Bāburnāma (Turki — Chagatai/Persian: بابر نامہ‎;´, literally: «Book of Babur» or «Letters of Babur»; alternatively known as Tuzk-e Babri) is the name given to the memoirs of Ẓahīr ud-Dīn Muḥammad Bābur (1483–1530), founder of the Mughal Empire and a great-great-great-grandson of Timur.

The «Memoirs of  Babur» or Baburnama are the work of the great-great-great-grandson of Timur (Tamerlane), Zahiruddin Muhammad Babur (1483-1530). As their most recent translator declares, «said to ‘rank with the Confessions of St. Augustine and Rousseau, and the memoirs of Gibbon and Newton,’ Babur’s memoirs are the first—and until relatively recent times, the only—true autobiography in Islamic literature.» The Baburnama tells the tale of the prince’s struggle first to assert and defend his claim to the throne of Samarkand and the region of the Fergana Valley. After being driven out of Samarkand in 1501 by the Uzbek Shaibanids, he ultimately sought greener pastures, first in Kabul and then in northern India, where his descendants were the Moghul (Mughal) dynasty ruling in Delhi until 1858.

The memoirs offer a highly educated Central Asian Muslim’s observations of the world in which he moved. There is much on the political and military struggles of his time but also extensive descriptive sections on the physical and human geography, the flora and fauna, nomads in their pastures and urban environments enriched by the architecture, music and Persian and Turkic literature patronized by the Timurids. The selections here—all taken from his material on Fergana—have been chosen to provide a range of such observations from the material he recorded at the end of the 1490s and in the first years of the sixteenth century. It should be of some interest to compare his description of Samarkand with that of the outsider, Clavijo, from a century earlier.

This translation is based on that by Annette Beveridge, The Babur-nama in English, 2 v. (London, 1921), but with substantial stylistic revision to eliminate the worst of her awkward syntax. I have chosen to use Beveridge’s indications of distances in miles rather than confuse the reader with the variable measure of distance provided in the original. An elegantly produced modern translation is that by Wheeler M. Thackston, The Baburnama: Memoirs of Babur, Prince and Emperor (Washington, D. C., etc., The Smithsonian Institution and Oxford University Press, 1996). I have consulted Thackston and occasionally used his readings and renderings of the place names where the Beveridge translation was obscure. I would warn readers that my editing of the text has been done in some haste; further work would be needed to improve the style and standardize usages.

Interspersed in the text are illustrations, some being contemporary views of places Babur describes; the others (which may be enlarged by clicking on the thumbnails) taken from the miniatures of an illustrated copy of the Baburnama prepared for the author’s grandson, the Mughal Emperor Akbar. (The title page is here on the right.) It is worth remembering that the miniatures reflect the culture of the court at Delhi; hence, for example, the architecture of Central Asian cities resembles the architecture of Mughal India. Nonetheless, these illustrations are important as evidence of the tradition of exquisite miniature painting which developed at the court of Timur and his successors. Timurid miniatures are among the greatest artistic achievements of the Islamic world in the fifteenth and sixteenth centuries.

William Beveridge’s mother, Annette Susannah Akroyd was born in Stourbridge in 1842. In 1872 she started a new life in India, establishing a school for girls there and marrying (in 1875) Henry Beveridge, a judge in the Indian Civil Service. They had four children, two of whom died before reaching adulthood. The two surviving children were William and his sister, Annette Jeanie (later Mrs R H Tawney). While still in India, Annette began a new career as a translator of early oriental texts, including nearly 20 years labouring on the translation of Babur’s autobiography, Babur-nama. Annette left India in 1890 and returned to Britain. She died in 1929 – just months before her husband.

Much of the story of Annette and Henry’s life in India (now northern India and Bangladesh) is told by William in his biography of his parents, “India called them”, published in 1947. The book was based mainly on the extensive correspondence which his parents sent to each other on the numerous occasions they were apart. Such absences were frequent as Henry was often posted to lowland locations which were considered too inhospitable for raising children, particularly during the hot seasons.

The bulk of this correspondence (with other papers of the couple, including Annette’s diaries) is held by the Asia, Pacific and Africa Department of the British Library (MS Eur C 176). From the extensive extracts of the letters in “India calls them”, it is clear that they contain much detail on life for British civil servants and their families in India in the late 19th century. They cover many different topics, including personal news; family matters; social relations; servants; reading habits; gossip; court cases; religious and political views; and descriptions of beautiful countryside, dreadful illnesses, laborious journeys and unfriendly wildlife (such as snakes and leeches).

There are also many items relating to his mother among William Beveridge’s papers here at the LSE, mainly in series 1 (personal and family papers) and series 2 (correspondence). Amongst these are:

The letters include much biographical information about William’s life as well as his mother’s. They sometimes contain information about Beveridge’s career and his views. Among the letters are some ”conversations” – scraps of paper written to aid personal communication as Annette became increasingly deaf.

Lists of the articles and other writings are available in each of the volumes in BEVERIDGE/10 (originally known as Beveridge Varia). As part of the cataloguing project, these lists will be typed up, checked and made available on the online Archives catalogue.

So far, there is only a basic list of the photographs in BEVERIDGE/SUPPLEMENTARY/7. At first glance, they do contain some images of Annette, including the photograph featured on this blog – which was taken at the studios of Herbert Rose Barraud (1845-1896). Creating a more detailed list of these photographs is another task for this cataloguing project.